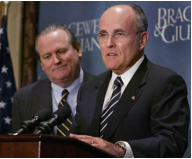 Rudy Giuliani’s Greenburg Traurig Law, Reported to Bar Consul for Discrimination
Boston, Ma. October 19, 2016   – Rudy Giuliani, a top Donald Trump surrogate left Bracewell & Giuliani this past January to join Greenberg Traurig Law, where he serves as global chair of the firm’s cybersecurity, privacy, and crisis management practice.  Giuliani ‘s, Greenburg Traurig Law, alongside one of the firm ‘s Shareholder ‘s, Zachery Kleinsasser, has now had complaints filed against them with the Massachusetts Bar Consul and a second complaint with The Massachusetts Commission Against Discrimination.   Both complaints specifically name Giuliani’s firm, GreenBurg Traurig Law for allegedly refusing to acknowledge the rights of a disabled, self-represented litigant, which they are required to do according to the Americans with Disabilities Act, The Model Rules of Conduct and state and federal law.

The complaints highlight a dispute that began in June 2013, where Giuliani’s firm, Greenberg Traurig LLP was retained to represent a multinational corporation in a trademark infringement claim against a legally blind, disabled, self-represented litigant. Despite this fact Greenberg Traurig empowered two shareholders, Attorneys Victor H. Polk, Jr. and Zachary C. Kleinsasser, as lead attorneys. The complaints also allege that Greenberg Traurig employed sixteen other attorneys and staff members over the course of the litigation, including various other shareholders, associates and law clerks, paralegals and research assistants.

The trademark dispute at the base of the civil rights complaints states that Greenburg Traurig sought damages for their client in the amount of $ 2, 100,000 and only yielded $10,000, after nearly four years of contentious litigation against the self-represented Defendant. Upon closing of the case a Greenburg Traurig Shareholder and Lead Attorney, Zachery Kleinsasser issued a subpoena to perform a post – judgement deposition on the named Defendant in the trademark dispute.

The complaints allege that the Defendant agreed to be deposed but requested an accommodation for a venue change, as his certified, documented disabled status has left him immobile without readily available transportation. The complaints allege that the Defendant was willing to drive his bicycle thirty minutes to a friend’s office, to adhere to the demanded deposition. The complaints also allege that Defendant requested to take an Uber at the expense of Greenburg Traurig Law. All of these accommodation request was ignored by the Greenburg Traurig Shareholder, Zachery Kleinsasser where he only stated “The deposition will take place at our office in Boston, as indicated in the deposition notice”.   This statement was made after Attorney, Kleinsasser was provided two sworn affidavits from medical professionals affirming the Defendant’s medical position. The complaints allege that Attorney Kleinsasser, was also given citation of Title III of the Americans with Disabilities Act in 15 different email correspondences which he ignored.  Title III of the ADA prohibits public accommodations such as law firms from discriminating against an individual on the basis of disability in the full and equal enjoyment of the goods, services, facilities, privileges, advantages, and accommodations of a place of public accommodation.

The complaints allege that Attorney, Kleinsasser refused to acknowledge any of the Defendant’s civil rights even after being provided with the language contained in the Act, stating “Your claims are without merit” and went on to ignore 7 request by the Defendant for a meet and confer on the topic. The complaints also allege discriminatory statements were previously made by Attorney Kleinsasser where he stated to the court that through his own assertions “even assuming that the Defendant is disabled, there is no evidence that his “medical challenges” affected his ability to represent himself in this case”.